My first-ever yoga class was a nightmare. The only thing I knew before I walked into a repurposed dance studio at the 24 Hour Fitness in my neighborhood was that my best friend had been doing yoga for a year and loved it. I figured it couldn’t be all bad, right? I wanted to try out some different kinds of movement, so I tentatively walked in.

The first thing I noticed (of course) was that everyone there looked different than I did… and not just because they seemed to have Yoga Outfits. The (mostly women) in the room were clearly preparing themselves for a Serious Workout. The next 60 minutes or so inched by in a blur of slow-motion torture, as I attempted to save face by making my body do things I’d never before thought possible. That’s because they weren’t really possible for me, but the teacher offered no alternatives. When savasana came around, I had no idea what had just happened (or why we were now just laying there), but I was really confident I’d never subject myself to yoga again.

It took a little while, but… I did come back. In fact, I have never gone more than a year or two, in the 20 years since, without feeling the tug to go to a yoga class. It never made sense to me, though: How could I be so drawn to something that so consistently felt unwelcoming?Why didn’t there seem to be any spaces with people like me doing yoga?

That’s when I found Curvy Yoga, and almost immediately I knew that I had to become a yoga teacher. If I was feeling out of place in yoga classes, yet kept going,I knew there had to be others for whom yoga was, at the very least, an interesting (but impossible-seeming) idea.

In the two years I’ve been teaching yoga, I’ve come to understand something that author Richard Bach once said: “We teach best what we most need to learn.” My yoga class is the class I desperatelywanted to find when I was still figuring out what yoga held for me.To be honest, my yoga class is the class I still desperatelytry to find as a yoga student. I teach what I crave. (I’m still looking for it.)

This realization has spilled far, far off my mat, though; it’s come to inform just about everything I do in relation to other people. Whether it’s with my stepkids, the students I teach at my community college, or what I put into my social media feed, I can almost always step back and see how the messages I share with others are in service of this impulse.I ‘teach’ (whether it’s formalized instruction or not) those things I wish someone had taught (or was teaching) me.

I talk to my stepkids about how to listen to the hunger cues their bodies are sending, how to trust those, rather than looking outside themselves for guidance (even to their biological parents, who tend to favor rules like, ‘One dessert a day!’ or “We eat veggies with every meal!”). As a young person, I needed someone to tell me that I didn’t need to hide what I was eating, that they wouldn’t think less of me for what choices I made.

I teach political science classes where, as a conflict-averse lover of harmony, I emphasize that intelligent people can disagree for good reasons and–get this!– NOT call each other the new Hitler. As a college student, I needed someone to tell me that being a political junkie didn’t require becoming a dismissive jerk to everyone who didn’t see the world exactly as I did.I suspect I would’ve been a better friend and colleague had someone let me in on that apparently well-kept secret sooner.

I share nuggets in my social media feed about the need for empathy, compassion, and meaningful connection.As an attentive citizen, I’m pretty confident those are the things I need more of to navigate these, um, interestingpolitical times.

You don’t have to stand in front of a room of students to teach. We’re all teaching one another things, every day, even if it’s just what behaviors we cannot tolerate or when we cross the line from mildly hungry to full-on hangry. What lessons are you teaching others that you wish someone had taught you sooner?What lessons do you still wish someone would teach you? Could you teach those to someone you love? 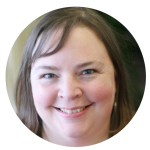 Liz Norell is a yoga teacher, life coach, podcaster, and college professor who values genuine connection and service above all else. She helps women root down into their true callings, then gather the courage to leap to answer those callings.